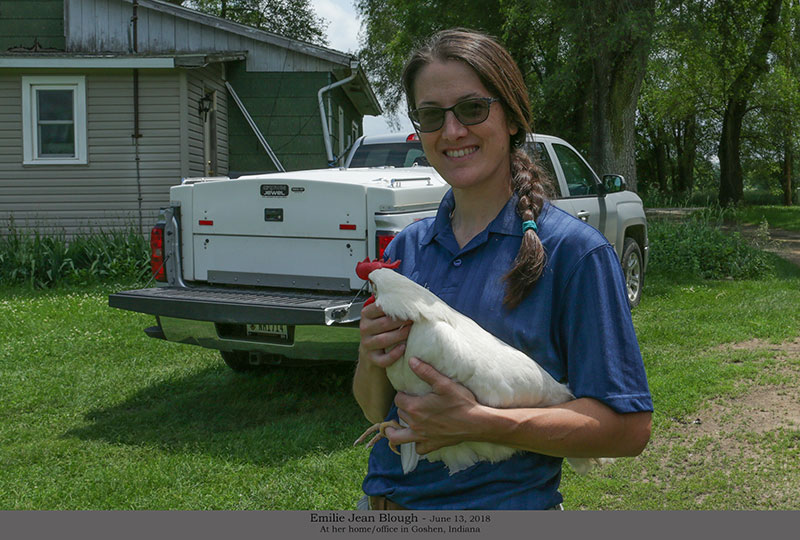 Emilie J. Blough, DVM started Crossroads Food Animal Veterinary Service, LLC in January of 2012. Dr. Blough is a Goshen, IN native who was raised on her family’s farm (dairy, beef, and crops) near Middlebury. She knew early on in life that she wanted to be a veterinarian, and enjoys the work of her childhood dream job. [The exception is the days of below freezing temperatures, which make the demands of the job a challenge!]

Dr. Blough is a 2007 graduate of Purdue School of Veterinary Medicine, where she focused on studying food animals including cows, pigs, sheep, goats, and chickens. After graduation from veterinary school, she attended the Cornell Summer Dairy Institute at the Cornell University of Veterinary Medicine. The 8 week program focused on advanced training for the next generation of dairy focused veterinarians.

Dr. Blough spent 4 years practicing in the tri-state region of East Central New York, Vermont, and Massachusetts before returning to Goshen in October 2011. While the practice in the Northeast focused on serving conventional dairy farms, she also gained experience working with individuals raising pastured pork and poultry, sheep and goat dairies, beef cattle operations, organic, and grazing based operations. In addition to working with cattle professionally, Dr. Blough enjoys spending time working with her own small herd of cattle too.

Dr. Blough considers herself a lifelong learner, who actively pursues continuing education opportunities. Some notable events attended include the following:

Dr. Blough is a graduate of Manchester College (now University) in North Manchester, IN and studied Biology-Chemistry. She played on the Women’s Soccer and Softball Teams at Manchester and continues to enjoy playing and watching sports. Whenever possible, she spends time outdoors and enjoys travel, hiking, music, and helping friends. Dr. Blough is very proud to have been a 10 year 4-H member of Elkhart County, IN. She continues to assist 4-Her’s and helps at several county 4-H and youth fairs. Dr. Blough is a member of Goshen City Church of the Brethren, the Crystal Valley Exchange Club, and an Independent Ambassador with Zilis, a health & wellness company with a full spectrum hemp CBD oil safe for animals. 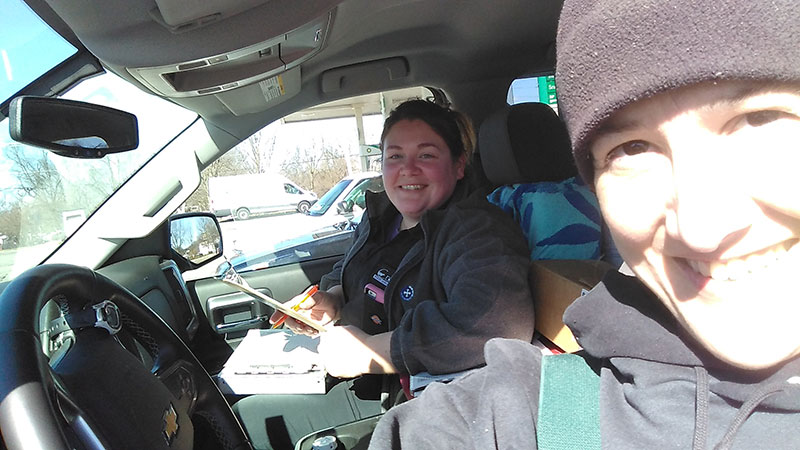 Sheila Kantz joined the Crossroads team in September of 2015. She primarily assists in the office, but does occasionally get recruited for farm visits with Dr. Blough. Sheila had previous secretarial experience at Goshen Hospital ER, where she worked for 8 years prior to being a stay-at-home mom after the birth of her youngest daughter. Now that her girls have reached school age, she is able to spend more time in the office. Sheila conquers the challenge of juggling inventory, filing, invoicing, and being the chief Crossroads organizer!

Sheila is a graduate of Northridge High School and a former band-mate of Dr. Blough. They reconnected after Sheila and her family bought goats and needed a trustworthy veterinarian! Sheila, her husband Nik, and their 2 daughters, Gabbee & Libbee live on a small farm in Bristol. They raise Boer & Pygmy goats, maintain a few rabbit breeds, and their daughters have horses primarily for 4-H. They also have a dog named Sparky and enjoy farm fresh eggs from their small flock of chickens. Sheila is very involved at her daughters’ school and enjoys fabric crafts like sewing and counted cross stitch in her spare time. 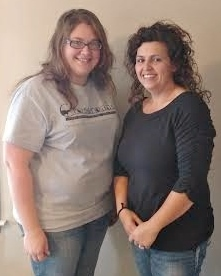 In Memoriam: Candice Targgart, BS, RVT joined the Crossroads team in 2015. She graduated from the veterinary technology program at Purdue University with her AS in 2004 and BS in 2005. After graduation, she began working at Calfcare, a bovine exclusive practice focused on calf and young stock health & management, in North Manchester, IN. During Dr. Blough’s senior vet school off campus rotation at Calfcare, Candice and Dr. Blough developed a professional rapport that would form Dr. Blough’s gold-standard for a vet & vet-tech dream work partnership. In 2015, the two reconnected while providing their professional services in several research study projects, which became a catalyst for bringing the dream to reality.

Candice was a multi-talented lady. Dr. Blough referred to her as her “right hand everything”. Candice’s dedication to agriculture, the veterinary profession, her meticulously attentive nature, and gift with animals was evident in all she did. Candice was called home to be with Jesus after a short, courageous battle with a rare cancer tumor called Rhabdomyosarcoma in March of 2017. Her presence is greatly missed by many as she was a friend to all she met.

Candice is survived by her husband, Travis and their sons, Layne and Brock. She was recognized as the 2018 Distinguished Veterinary Technology Alumna Award winner posthumously by Purdue University College of Veterinary Medicine in September of 2018.

Anna is a Holstein cow that was born on May 15, 2009.  Anna got a broken leg not long after she entered this world, and was given to Dr. Blough as a 1 day old calf.  The photo above is actually of Molly, one of Dr. Blough’s other cows, who also was given to her with a broken leg needing repair. Anna and Molly both received a fiberglass cast to stabilize their broken bone(s), and their legs healed very well.

Anna has calved five times. The first calf she raised was named Noel, her second calf was Arthur, her third pregnancy was a set of TWINS named Aiden and Abby, and her fourth calf was Addy. Anna has just recently calved her fifth, Eddy. Anna has been a friendly companion to many humans and animals through the years and continues to be a lovable pet cow. 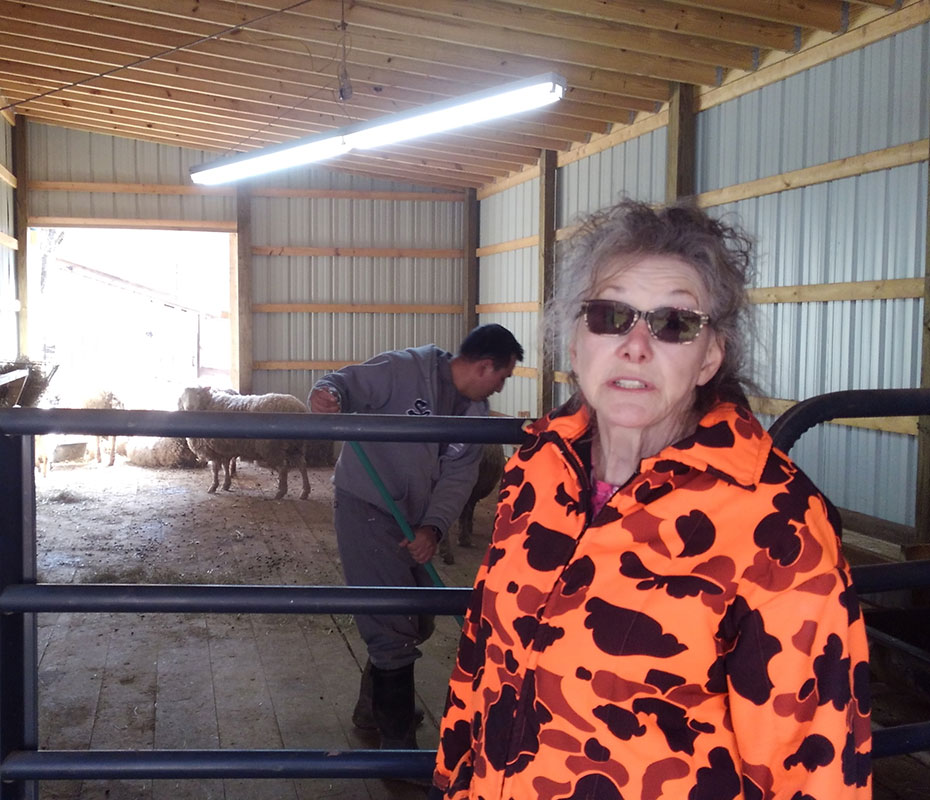 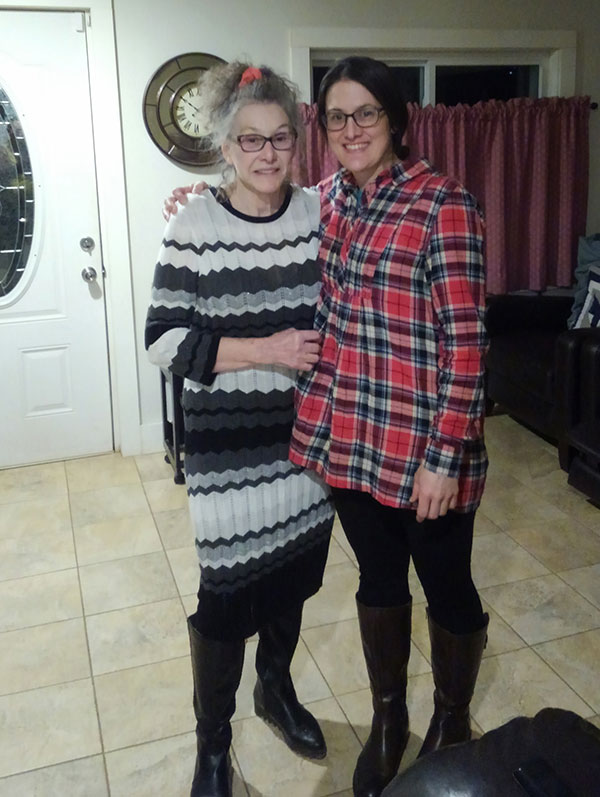